Paul Millen: Forester of the Year 2021

Marlborough’s Paul Millen has won the New Zealand Institute of Forestry’s prestigious 2021 award as NZ Forester of the Year. This recognises eighteen years work undertaking research of eucalypts by establishing trials in various parts of the country, initially to develop durable untreated posts for his region’s vineyards.

Paul is a founder of the New Zealand Dryland Forests Initiative (NZDFI) and Project Manager since it formed in 2008 with strong ongoing support from the Marlborough Research Centre.

His work with durable eucalypts goes back to at least 2003, when he and brother Ash saw an opportunity to provide naturally durable posts for Marlborough’s vineyards to replace treated pine posts. They began trialling more than two dozen eucalypt species and realised they had also hit upon a farm diversification option for Marlborough’s dryland farmers.

Paul then teamed up with former Canterbury University School of Forestry friend Shaf van Ballekom, CEO at Proseed, owned by Ngāi Tahu, the largest forest seed producer in Australasia. They linked to the School of Forestry to introduce a tree improvement and forest research programme in eucalypts, with wood quality a major component. The initiative has attracted internationally renowned researchers and supported 11 PhD students to date.

“It is a real surprise and a privilege to be recognised by this award,” says Paul. “NZDFI’s success isn’t driven by me - rather by the many willing collaborators, our NZDFI team, landowner hosts and the many industry supporters - that share my vision for a NZ durable hardwood industry. The interest and energy of all those involved gives me confidence that we can make this vision a reality.”

“Paul successfully sought funding from many sources - government, local authorities, industry and farmers – resulting in $9 million being raised to date,” says Gerald Hope. “It has expanded beyond Marlborough to include 36 sites in eastern and northern NZ, breeding durable eucalypts with high wood quality.”

New Zealand Institute of Forestry president James Treadwell says the Forester of the Year award acknowledged Paul Millen’s diverse range of skills and experience. “From hard graft and commitment at grassroots level to high-level policy planning and execution and academic leadership. He has massive drive, energy and capacity for work and has made and will no doubt continue to make an outstanding contribution to the NZ forest industry.”

The award was presented in Wairarapa earlier this month by Forestry Minister Stuart Nash.

Paul Millen has been involved in the Marlborough community since arriving in the 1980s, working in various roles for the local authority and environmental and community projects. These included a major role in developing the Wither Hills Farm Park as a working farm and public recreation area for the Marlborough District Council. 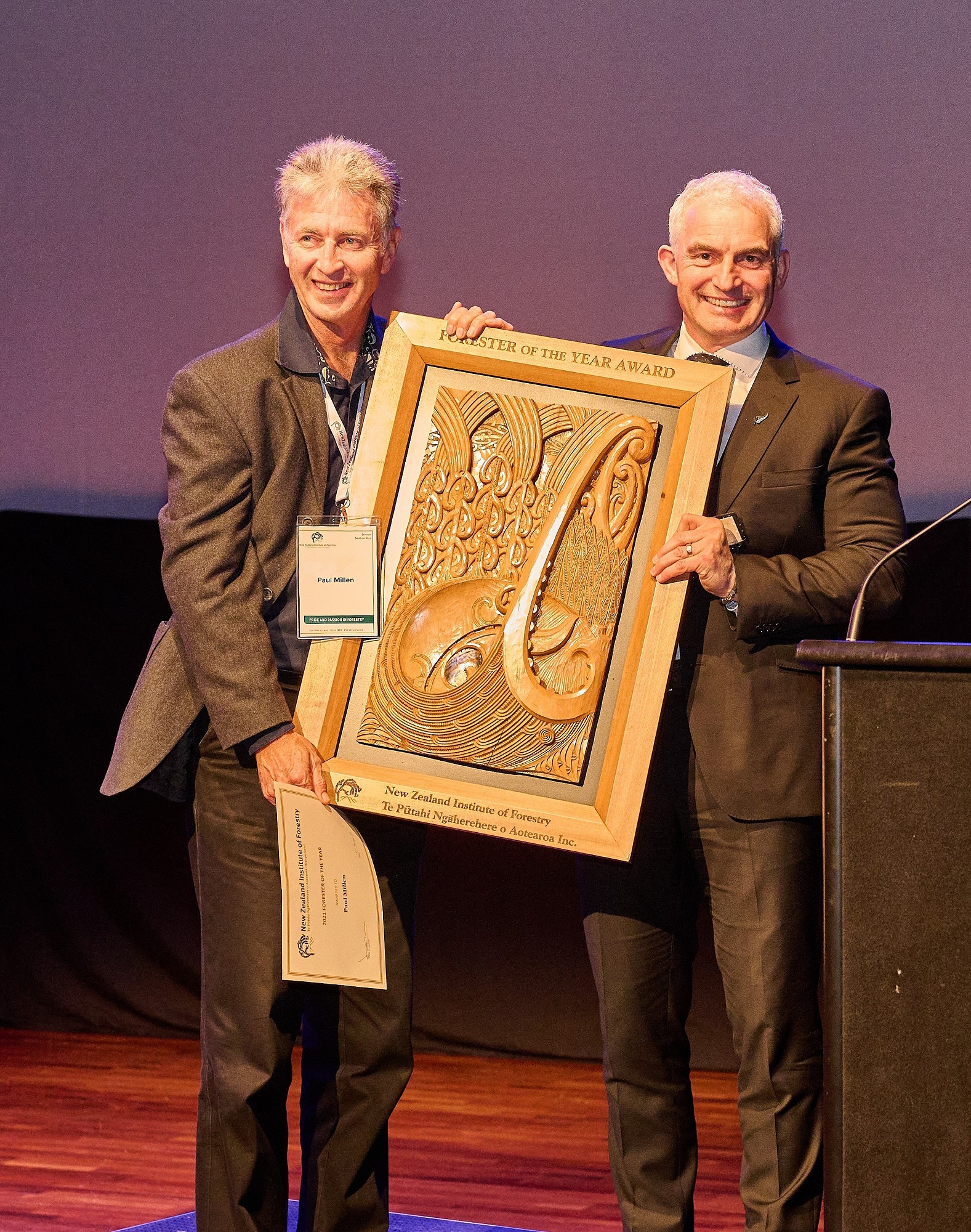