Since 2003, Marlborough-based Vineyard Timbers Ltd has been working to develop an industry based on home-grown, naturally durable timber posts for use in vineyards. Between 2006 and 2009, around 1400 posts were supplied to six vineyard owners in the lower Wairau Valley to see how the posts performed in real conditions. The vineyard owners were keen to trial an alternative to the CCA-treated radiata pine posts commonly used in New Zealand’s vineyards.

A 2017 survey of the six vineyards has been completed. The survey had two aims:

The posts have been in use for the past 9-11 years. In general they were found to be performing well, with low levels of decay and minimal breakage. Vineyard owners and managers gave valuable feedback on their performance compared to various other types of posts available.

Vineyards cover almost 40,000 hectares in New Zealand. Up to an estimated 21 million posts are in use to support vines; by far the majority are copper-chrome- arsenic (CCA)-treated radiata pine posts. These CCA-treated posts cause a range of concerns, both for growers and the wider public, including:

An estimated 3-5% of posts break and need to be disposed of (and replaced) annually. Growers tend to stockpile broken posts because disposal is difficult and expensive. The only pyrolysis plant is in the North Island (where posts are burned at very high temperatures and the residues turned into charcoal). Such a plant may solve the disposal problem, but may also raise negative public reaction and leaves other concerns unaddressed.

Naturally durable timber provides an attractive alternative to CCA-treated posts. Vineyard Timbers Ltd has identified a number of eucalypt species as having good potential to grow in New Zealand and supply durable timber. Not only is the eucalypt timber naturally durable (requiring no chemical treatment), it is also much stronger than radiata pine, and so less likely to break when hit by harvesting and pruning machinery.

Between 2006 and 2009, timber from several promising species, including in particular Eucalyptus bosistoana (coast grey box), and E. globoidea (white stringybark), was sourced from existing mature trees and milled to produce vineyard posts. Based on their durability ratings (Australian Standard), the E.bosistoana posts are expected to last at least 20-25 years in situ, and the E.globoidea 15-20 years. Around 750 E.bosistoana posts, 300 E.globoidea posts, plus 355 posts of other eucalyptus species, were purchased by six vineyards in the lower Wairau Valley.

Performance of the durable timber posts over 9-11 years

In 2017, the six vineyards were contacted and then visited. The vineyard owners or managers were questioned to gauge their experience and opinions of the posts. A sample of the eucalypt posts in use was also carefully examined to assess general performance and rates of decay.

Four of the vineyards had installed the posts as replacements for broken CCA-treated posts; one used them in setting up a new vineyard, and another in a small feijoa orchard. Five owners manage their properties under organic standards, with mechanical harvesting and some mechanical pruning. Two also use mechanical under-vine cultivation.

During visits to the vineyards, 1065 posts were found to still be in service. Another 14 were found broken, 1 failed from decay and 45 in storage. A sample of 150 posts in four vineyards was selected and tested for decay.

Feedback about the posts was generally positive, thanks to their natural durability and hence acceptability for organic/sustainable production standards. Four owners said they would use the posts again, especially if supply was local, guaranteed, and certified as having come from sustainably managed forests. 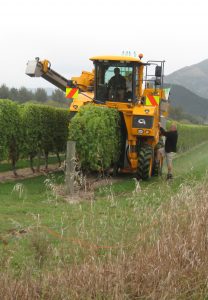 Mechanical harvesting results in many broken posts each year. 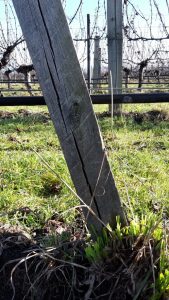 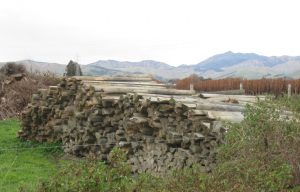 Broken posts stock-piled in a vineyard. 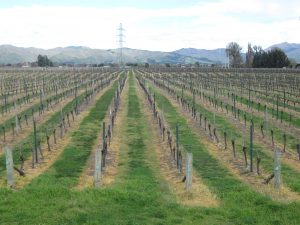 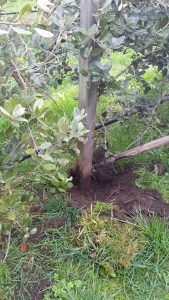 In-ground assessment of E.bosistoana showing virtually no decay after 11 years.

Breakages reported were minimal – only 14 in total – and mainly due to large knots in the posts (which could easily be avoided in future by quality control). One E. globoidea post had failed from decay, likely due to presence of sapwood. The main negative comments were about how hard the eucalypt timber is, making nailing or fastening wire hangers difficult. Pre-drilling was deemed necessary, and this is time-consuming. One owner also found some posts had twisted in storage due to cross grain. Two owners suggested the posts should be larger.

A sample of 150 posts in service across four vineyards were examined to assess timber condition in the top 200mm of the soil horizon where maximum decay is likely to occur. Findings included:

The posts assessed in this survey were not part of a dedicated scientific test to assess durability; rather they were part of commercial vineyard operations. The feedback from vineyard owners/managers and the results of our decay assessments demonstrate that durable eucalypt vineyard posts of both E. bosistoana and E. globoidea provide at least 10 years’ useful service with low levels of breakage.